The Jacksonville District, U.S. Army Corps of Engineers, will begin dredging sections of the Intracoastal Waterway in the vicinity of St. Lucie Inlet and Jupiter Inlet, in Martin and Palm Beach Counties.

The Corps requests boaters and residents to exercise caution near the crossroads, in the work areas and to watch for the marked floating pipeline within the IWW while dredging operations are under way.

About the St. Lucie Inlet 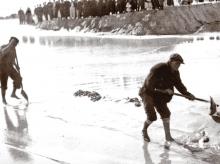 The inlet was originally opened in 1892 by local residents seeking navigable access with the Atlantic Ocean. The initial cut was 30 feet wide and five feet deep, however, after six years, the inlet had widened by 1,700 feet and had deepened to 6 to 7 feet. In 1922, the channel had grown to a width of 2,600 feet.

The St. Lucie Inlet serves a vital role in Martin County’s economy, ecosystems, and lifestyle of its residents. Commercial, sport, and recreational fishing define life in this community and each relies on safe and dependable use of the inlet. St. Lucie Inlet is one of the widest in Florida, nearly a half mile (2,362 feet), making this shallow draft inlet vulnerable to elevated sea states. It became a federal project in 1913 through the Rivers and Harbors Act.

The St. Lucie Inlet Management plan was adopted by the state 1995 and updated in 2016. It identified a preliminary bypass goal of 195,000 cy/yr. with 161,000 cy/yr. to the south and 34,000 cy/yr. to the north. Placement has frequently been in the Hobe Sound National Wildlife Refuge, focusing on the area of Peck Lake.

Dredging is typically conducted every two to four years to control shoaling in the three major reaches of this essential channel. Severe storms and adverse weather conditions can expedite the need for dredging, however, as material from beach and ocean areas settles in the mouth of the inlet and the inner channel, forming obstructive shoals. This shoaling results in an unreliable channel for boat traffic, negatively impacting safe navigation.

Of equal consequence is the health of the Indian River Lagoon, which depends on the natural flushing action provided by the healthy, open Inlet to remove stormwater runoff and discharge from Lake Okeechobee. Dredging provides effective management and bypassing of sands entering the Inlet, which maintains and enhances the natural flushing of these aquatic preserves.